What was the civil war?

The Civil War lasted from 1861 until 1865. The southern states wanted to have their own nation and be able to decide what laws to have. The north did not want the country to be broken apart. In the election of 1860 Abraham Lincoln stated that he wanted to stop the spread of slavery. The southern states said that if Lincoln won, they would secede (leave) the union. The southern states seceded from the union after Lincoln was elected. They formed their own nation, The Confederate States of America. The war began in April of 1861 when the Confederate Army took over Fort Sumter in Charleston, South Carolina.   President Lincoln was forced to declare war. The war was a long and bloody. Over 600,000 men on both sides died. Over 1,100,000 were injured. The south was devastated. General Lee surrendered to General Grant on April 9, 1865 at Appomattox Court House in Virginia. The war was over. 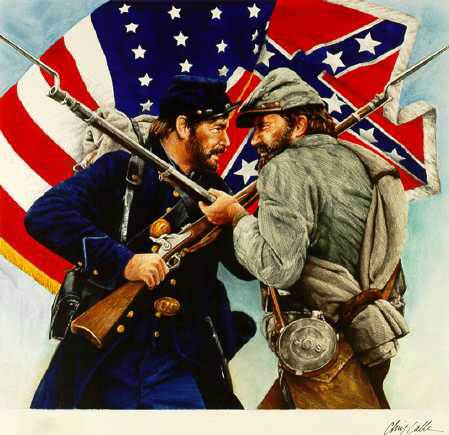 The Civil War is the central event in America's historical consciousness. While the Revolution of 1776-1783 created the United States, the Civil War of 1861-1865 determined what kind of nation it would be. The war resolved two fundamental questions left unresolved by the revolution: whether the United States was to be a dissolvable confederation of sovereign states or an indivisible nation with a sovereign national government; and whether this nation, born of a declaration that all men were created with an equal right to liberty, would continue to exist as the largest slaveholding country in the world.

Civil War Overview:  From the Civil War Trust, this provides an overview of the issues of the war, including states' rights, slavery, trigger events, and why non-slave holding Southerners fought.

Explore the faces, places and events of the U.S. Civil War

Slavery: Cause of the Civil War

Documents of the Civil War

PRIMARY DOCUMENTS OF THE CIVIL WAR