What are the characteristics of a coral reef?

What lives or grows in the coral reef?

Who or what depends on the coral reef?

What threatens the coral reef? LOCATION: Coral reefs are generally found in clear, tropical oceans. Coral reefs form in waters from the surface to about 150 feet (45 meters) deep because they need sunlight to survive. The three types of reefs include fringing reefs, barrier reefs, and atolls. Fringing reefs occur along shorelines of continents and islands and are commonly found in Hawaii and the Caribbean. Barrier reefs are found farther offshore than fringing reefs, occurring most often in the Indo-Pacific and Caribbean. Atolls are a series of low coral islands surrounding a central lagoon, frequently found in the Indo-Pacific. The largest reef in the world, the Great Barrier Reef in Australia is longer than 1200 miles (1900 km). That’s longer than the distance between Seattle, WA and Los Angeles, CA!

HABITAT: Coral reefs need water that is between 68 - 82°F (20 - 28°C), which is often located along the eastern shores of land. Reefs usually develop in areas that have a lot of wave action because the waves bring in food, nutrients and oxygen to the reef. Waves also prevent sediment from falling on the reef. Reefs need calcium from the water to grow, which is more often available in shallow warm waters.

PLANTS: The sun is the source of energy for the coral reef ecosystem. Plant plankton, called phytoplankton, algae and other plants convert light energy into chemical energy through photosynthesis. As animals eat the plants and other animals, energy is passed through the food chain. Reef building corals work together with microscopic algae, called zooxanthellae, that live in their tissue. The zooxanthellae provide oxygen and food to the coral through photosynthesis. The coral polyp gives the algae a home, and the carbon dioxide it needs through respiration. Besides zooxanthellae, algae and seagrasses are the main types of plants in the coral reef ecosystem. These plants give food and oxygen to the animals that live on the reef. Seagrasses are especially important because they provide shelter for juvenile reef animals like conch and lobster. ANIMALS: Did you know that there can be as many different types of fish in two acres of coral reef in Southeast Asia as there are species of birds on the entire continent of North America? Shocking, isn’t it? Coral reefs only make up about 1% of the ocean floor, but they house nearly 25% of life in the ocean. Animals use coral reefs either as a stopping point, like an oasis, as they travel the deep blue sea, or they live as residents at the reef. The corals themselves are the most abundant animal on the reef. They are tiny organisms called polyps, that attach themselves to the hard reef and live there forever. The reef is like a giant apartment building in New York City and the coral polyps live together in each apartment. Corals are closely related to sea anemones and sea jellies, and use their tentacles for defense and to capture their prey. Corals can be a variety of colors, white, red, pink, green, blue, orange and purple, due to natural pigments and the zooxanthellae in their tissues.

Other animals that live on the coral reef include sea urchins, sponges, sea stars, worms, fish, sharks, rays, lobster, shrimp, octopus, snails and many more. Many of these animals work together as a team like the coral polyps and zooxanthellae. This teamwork is called symbiosis. One example of symbiosis on the reef is the anemonefish and sea anemone. The sea anemone’s tentacles provide protection and safety for the fish and their eggs, while the fish protects the anemone from predators, such as butterflyfish. Sometimes anemonefish even remove parasites from their home anemone.

PEOPLE AND CORAL REEFS: Coral reef ecosystems are important for many reasons. They remove and recycle carbon dioxide, which is a gas that contributes to global warming. Reefs protect land from harsh weather by absorbing the impact from strong waves and storms. Reefs provide food, for example, lobster and conch. Coral reefs are also a huge tourist attraction. Coral reefs are a big source of biodiversity. Without the reef, many of these plants and animals would die. Some people think coral reefs may provide important medicines for people. For example, some coral skeletons can be used by humans as a bone substitute in reconstructive bone surgery. Coral reefs are also a useful educational tool. People can learn about biomes and ecosystems, and the interrelationship between organisms and their environment by studying coral reefs. Coral reefs are being destroyed at an alarming rate. It is estimated that we have already lost 10% of the worlds reefs, and scientists say that in the next 50 years many of the coral reefs on Earth will be gone. This destruction is often connected with human activity: pollution, sewage, erosion, irresponsible fishing, poor tourism practices, and global warming.

There are some simple things that you can do to help coral reefs. Don’t put chemicals down your drain or on your lawn. Instead use biodegradable products. Even though you may be far from a coral reef ecosystem, these products end up in the watershed and may eventually pollute waters that support coral. Conserve water. The less water you use, the less runoff and wastewater eventually find their way into our oceans. Visit a coral reef! Many vacation spots have beautiful coral reefs. When you go, hire local guides. This way you’ll learn about the reef from the people who know it best. When you visit a coral reef, treat it with care, do not touch or step on the corals. Leave the animals where you found them and do not pick them up and move them. If you have an aquarium, buy fish raised in captivity, not caught in the wild. Also, don’t use live rock in your aquarium. Although this invertebrate-encrusted rock is still legally harvested in some places, its can hurt the reef habitat. Join a group that is working to protect coral reefs. Pick up trash when you see it, this way it won’t find it’s way to the ocean. Learn more about coral reefs! Surf the Internet for information about coral reefs and marine conservation organizations. After all, knowledge is power.

Coral reefs are one of the world's most colorful and diverse ecosystems, and though they cover only about 1 percent of the ocean floor, they have a huge effect on the health of the rest of the world. 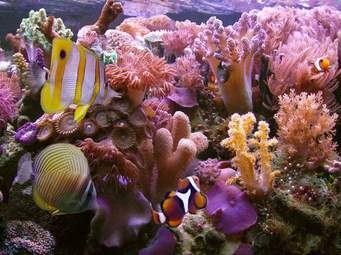 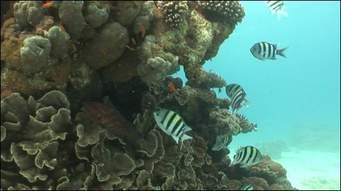 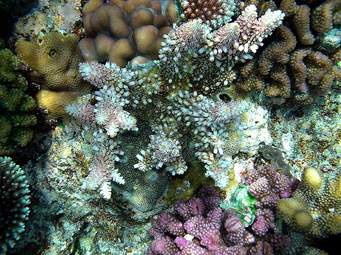 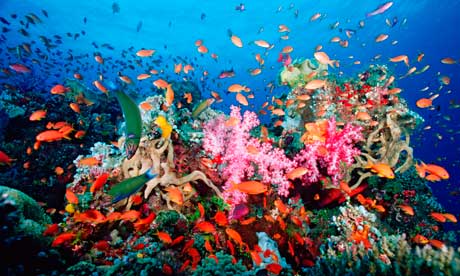 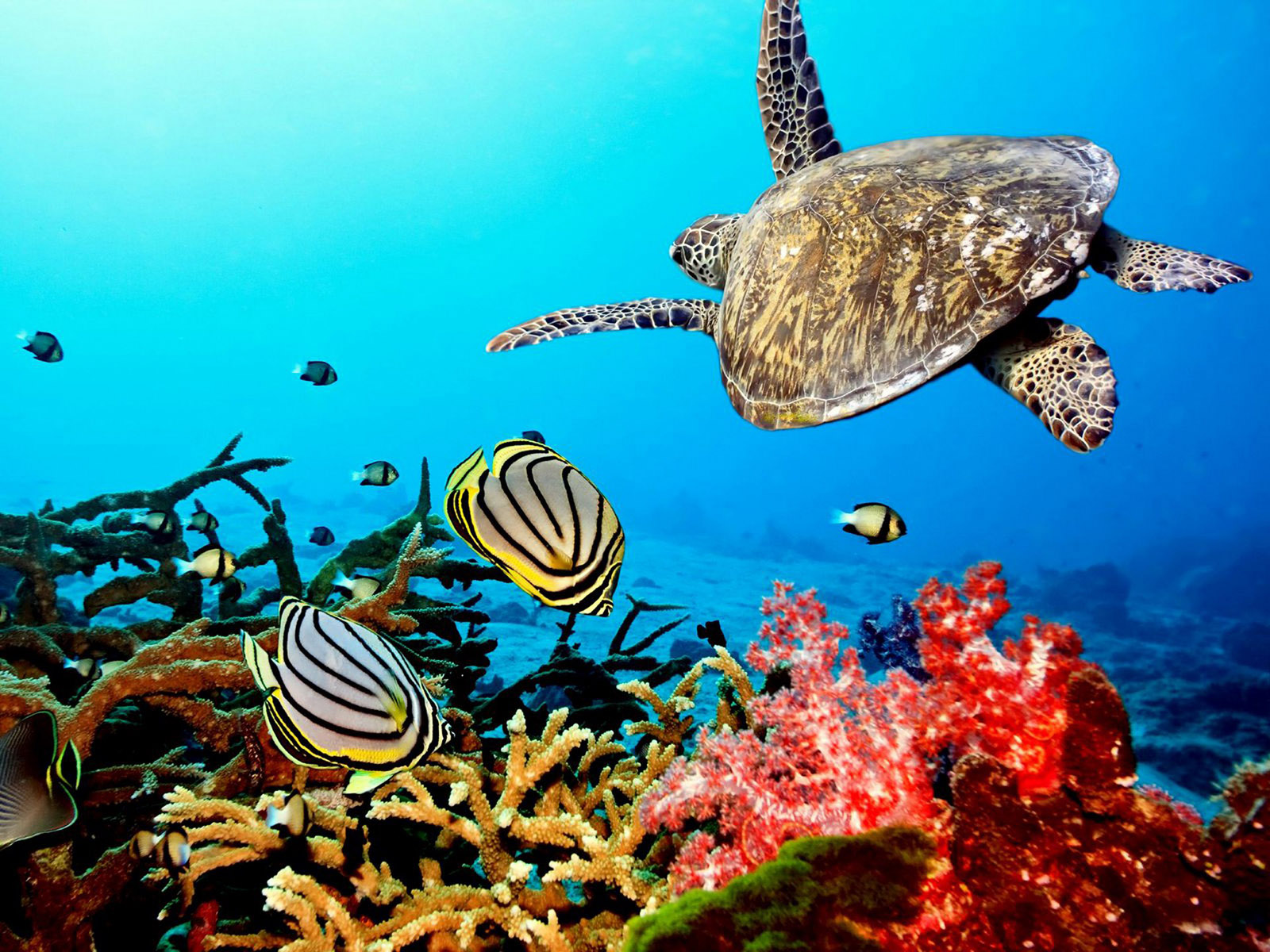 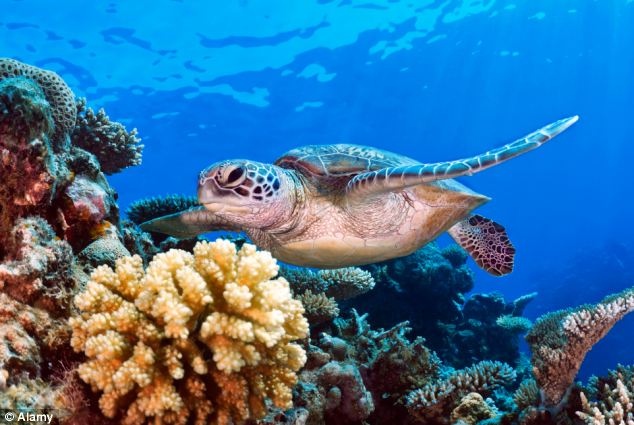 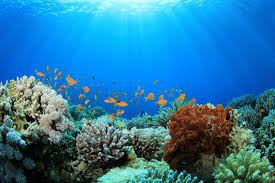